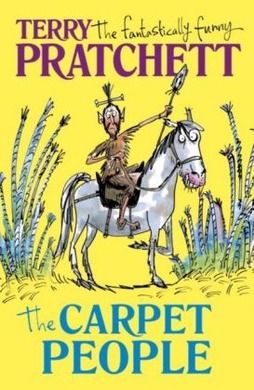 In the beginning, there was nothing but endless flatness. Then came the Carpet... That's the old story everyone knows and loves. But now the Carpet is home to many different tribes and peoples and there's a new story in the making. The story of Fray, sweeping a trail of destruction across the Carpet. The story of power-hungry mouls - and of two Munrung brothers, who set out on an amazing adventure. It's a story that will come to a terrible end - if someone doesn't do something about it. If everyone doesn't do something about it... Co-written by Terry Pratchett, aged seventeen, and master storyteller, Terry Pratchett, aged forty-three. "For readers who are attracted to epic but not quite ready for the weightiness of Tolkien, this is a perfect entree; for those who have loved or will love Pratchett, it's simply a must read." * Bulletin of the Center for Children's Books * "Only a writer with a masterstroke of imagination could place an entire empire of goodies and baddies within the fronds of a carpet" * Daily Mail * "The perfect starting place for young readers... seasoned Pratchett fans will just revel in his wit, his subversion of tropes and his sense of humanity." * Kirkus * "A unique piece of high fantasy... Now very witty and politically aware in its revised version with the new ending" * Vector * "The story is inventive in its carefully worked-out central conceit, often very funny, and dotted with some genuinely scary bits." * Publishers Weekly *

Harry Potter and the Deathly Hallows

Twenty Thousand Leagues Under the Sea

The House with Chicken Legs

Harry Potter and the Chamber of Secrets Gryffindor Edition

The Chronicles of Narnia Box